I am currently working on something interesting for a university project and wanted to share. Here we have a time series of US unemployment rates that goes from 1992 until 2018. The data is people over 25 with different educational backgrounds. In particular: 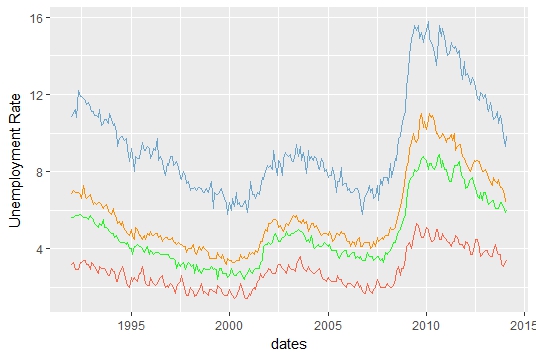 US unemployment rates by educational level

When I first looked at the series it seemed to be non-stationary. However, the professor told me something insightful: economists typically assume that unemployment rates are a stationary variable. This is the case because most of them belief that there is a natural rate of unemployment that is consistent with the long run growth rate of the economy. this is also known as the NAIRU (non-accelerating inflation rate of unemployment).

More things to comment. Notice that all series covary with the state of the economy. But some of them seem to covary more tan others. For instance, when the crises hit, unemployment almost doubled for people with less tan a high school diploma. It went from less tan an 8% to 16%. At the same time the unemployment rate of graduates never went above 6%.

It seems to be consistent with the idea that during bad times firms use to get rid of low skilled workers. There are several logics behind this explanation. First of all, wages also increase with the level of education. So in the case of high skilled labor, when firms have to decide how to reduce costs, they can just lower wages. But in the case of low skilled labor, as wages are closer to the minimum wage, the marginal savings from reducing wages may not compensate the marginal gains they can get from firing them. Another explanation could be that the sectors of the economy that when bust were intensive in the use of low skilled labor. 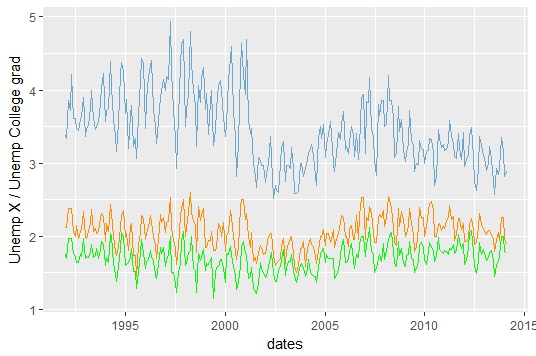 Here I just plot unemployment for: 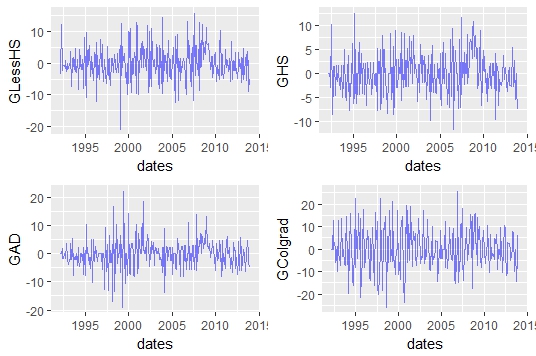 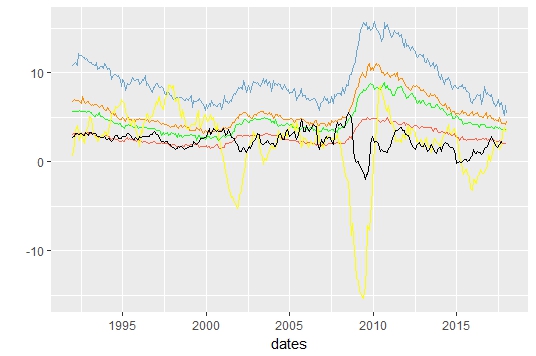 Here I plot unemployment rates again. But I also plot percent changes in industrial production from last year (for each month, in yellow) and I do the same thing with inflation (black line).

In particular, we will try to asess up until what extent our model could have forecast increases in unemployment rates from 2006 until today. To do that, we fit a linear model using dates previous to 2006, then we use this linear model to forecast changes in unemployment rates for those that finished their studies after high school and then we compare our predicted values with the real data. 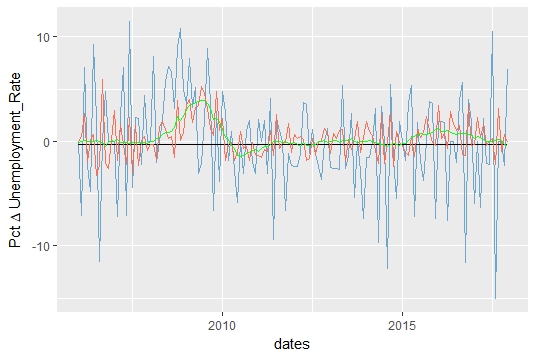 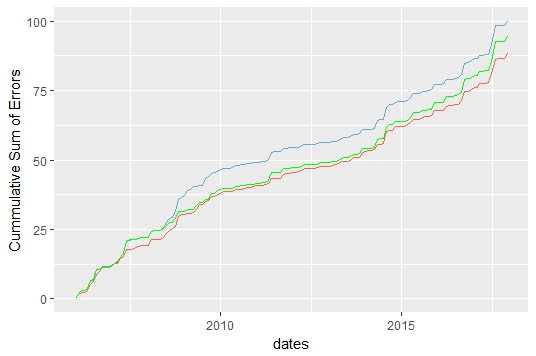 The blue line is the actual data. The red line is a linear model that uses lagged variables of changes in unemployment rates for people with the different studies and industrial production. The green line just uses lagged variables of industrial production. As you can see our model doesn’t do a really good job at predicting changes in unemployment rates but at least we capture something after the arrival of the last recession (too late, though). The R squared of the red line is 0.12 and of the Green line 0.05. You may also noticed by looking at the cumulative sum of errors plot. 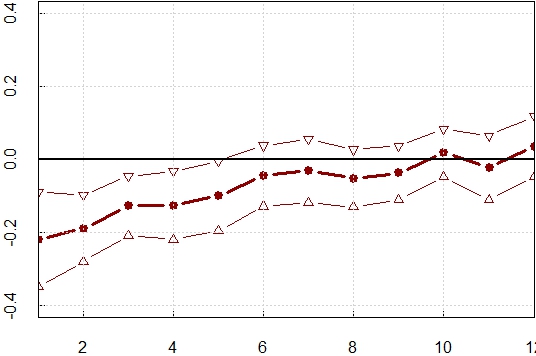 Finally we have also make a dynamic multiplier that tries to asses the impact that each lagged month of industrial production has on current changes in unemploymet rates for those that just went to high school. We can see that the first four month had a significant impact. A one percent increase in industrial production from one year to another predicts a twenty percent decrease in the unemployment rate for the first lagged month. The effect decreases for the next laggs but it remains significant until the fifth lagged month.

In the paper we also discuss ARMA models in detail. In particular we address their performance before and after the crises.